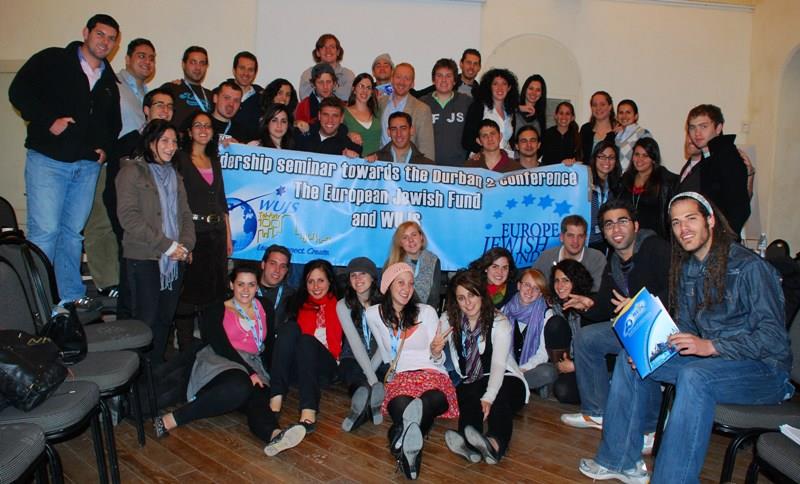 The aim of the World Union of Jewish students’ organization is to develop framework seminars where the young Jewish students can nurture their leadership skills. The seminar organized with a generous help of EJF offered them to raise the voice of Jewish students world-wide and to provide the students with tools for further Activism both globally and within their local Jewish communities. This seminar also increased the awareness for the importance of young Jewish Activism within the Jewish World and created a student specialist global task force in Hasbara, Human Rights and Israel affairs.

Leadership challenges that Jewish students need to cope with; Tools for forming an agenda and building affective campaign; Necessary historical and current background on the work of the UN; in general and within its Human Rights committee in particular; Mapping out the Jewish and Israeli involvement in the Human Rights committee- both on the Governmental level and the NGO’s level; Mapping out regionally which human rights NGOs are cooperative and plan future alliances with them as opposed to hostile/Anti-Semitic NGOs whose main mission is to portray the State of Israel and Jews in a negative light. One of the main content components was building WUJS Global campaign of Activism towards “Durban 2”.

Building a practicable plan of work that will include the gathering of relevant information, creating connection with relevant partners and so on. As a particular achievement of this seminar that was reached is the opportunity for students from all over the world to gain much knowledge in practical experience using the different tools taught in the seminar- debate, building campaigns, representation etc.

One of the definitely achieved goals of the seminar were raising awareness on Campuses for the problematic Global atmosphere against the state of Israel that the Durban conference is just one of its expressions; Jewish student involvement in the biggest project of the Jewish World and showing the importance of Young Activism in it.

An active network of Jewish students in Europe and elsewhere was created. The 55 participants were influenced deeply from the seminar and it has been a great challenge making sure that the circles of action will continue to grow after it. Many students became involved in our Activism and in other Jewish organizations’ activities, and it is a fact that the students have added their uniqueness to the general work process.

The European Jewish Fund in the past 2 years has stood by the WUJS, showing faith in the younger generation not only in words, but in actions. The support of the EJF has also enabled us to hold the 2nd annual Congress, in which around 150 students from all around the world gathered to create an agenda for Jewish students world-wide.